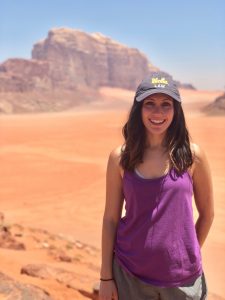 In December 2018, Laura Perry, a 24-year old previously-healthy law student, began experiencing abdominal pain after returning home from a trip to Mexico with her family. While in Mexico, Laura had contracted an infection. Believing that it was nothing serious, her doctor prescribed antibiotics. The antibiotics were unsuccessful in reducing the pain so Laura went to an urgent care in hopes of a more effective treatment. The urgent care doctor incorrectly diagnosed H. Pylori and prescribed more antibiotics. But, Laura’s pain intensified. She describes the pain as the worst pain she had ever experienced in her life, like someone was repeatedly stabbing a knife into her stomach. With increasing pain intensity, Laura went to the emergency room and found out that her lipase levels were alarmingly high. (The pancreas produces an enzyme called lipase that is released into the digestive tract to help digest fats).

At this point, Laura was hospitalized and diagnosed with acute pancreatitis. Given the lack of understanding and treatment for acute pancreatitis, Laura’s total pancreatitis treatment consisted of IV fluids, pain medications, and limited food, leaving her feeling frustrated and helpless, even after she was released from the hospital.

Although  she was initially told that her pancreatitis attack was acute and would probably not reoccur, over the next few weeks Laura had more attacks. An MRCP (similar to an MRI) revealed that her pancreatic duct was dilated. This triggered an endoscopic ultrasound which revealed marks on her pancreas consistent with early stages of chronic pancreatitis. Laura was hospitalized several times over the next few months and was increasingly frustrated by the apparent lack of effective treatment. She was also asked, and challenged, about her use of alcohol, even though she had clearly informed the hospital that she rarely drank alcohol. Laura was frustrated at having  to deal with the stigma that surrounds pancreatitis while dealing with increased frequency and severity of pain.

Incorrect Assumptions About Pancreatitis and Alcohol

Unfortunately, Laura’s experience of being questioned about alcohol is common. Many doctors immediately assume alcohol when asked about the cause of pancreatitis. This damaging stigma serves to prevent further research in understanding or finding effective treatments for this debilitating disease despite findings that, “Only very heavy drinking—four or five drinks a day over a prolonged period (five+ years)—appears to be associated with the onset of CP. Even among people who drink that amount, only about 3 percent develop pancreatitis” (Pandol, 2019). It is clear that the stigma of alcoholism surrounding pancreatitis is incorrect. It has even been noted that “moderate drinking appears to be associated with lower rates of chronic pancreatitis” (Pandol, 2019).

Every Pancreatitis Patient’s Question: What Next?

Despite visiting many doctors, Laura received limited information, help or answers; opioid prescriptions and dietary suggestions were the only “treatments” for Laura’s debilitating pain and other symptoms. Her acute pancreatitis became chronic pancreatitis. She was diagnosed with chronic idiopathic pancreatitis, meaning the exact cause of her disease was unknown, leaving her searching for answers.

Search for a Chronic Pancreatitis Treatment

Just as Laura was ready to throw in the towel and accept the bleak reality of a future with pancreatitis, she met Dr. Stephen Pandol, one of the nation’s leading pancreatic experts and an advisor to Mission: Cure. Pancreatitis, despite being a rare disease, does not progress or feel the same for all patients and both Dr. Pandol and Mission: Cure advocate for individualized treatment for this complex chronic disease. Dr. Pandol is a leader in providing innovative treatment options for his pancreatitis patients. For example, he evaluates existing, safe medications that are used for other conditions, but have scientific evidence of positive effect on pancreatitis. These medications are known as “repurposed” drugs.

Dr. Pandol ordered genetic tests for Laura from Ariel Precision Medicine and Laura’s genetic results indicated that she has several genetic indicators related to pancreatitis. This genetic information helped Laura better understand the underlying causes of her disease. Additionally, Dr. Pandol has conducted pancreatitis studies that Laura has eagerly participated in including studies that will help identify potential treatments for herself and others. Laura also started working with Mission: Cure to learn more about her condition and alternative treatments which gave her hope and support in  her journey and these connections helped Laura stay optimistic and hopeful as she continues to fight her disease. 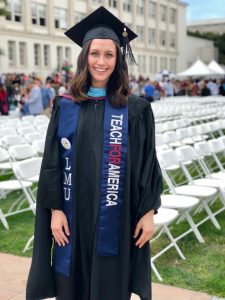 After finishing Teach for America, Laura received her Masters in Education

Laura’s immeasurable strength and resilience is evidenced by her many accomplishments. She currently attends law school and maintains a near-perfect attendance record despite her battle with pancreatitis. Despite previously being in constant pain—one that has often been described as more intense than that of giving birth—Laura graduated at the top of her class and remains ambitious in her career aspirations. After her first summer of law school, she interned at the American Civil Liberties Union and this past summer Laura worked at a litigation firm, focusing on projects related to voting rights and higher education. Laura has not allowed pancreatitis to hold her back from achieving her goals.

Laura’s story is filled with hope and strength but is also tainted by the harsh reality that there are no effective therapies to treat or cure pancreatitis. Patients like Laura are suffering every day with this disease.  Every day, we at Mission: Cure are committed to taking meaningful steps that will bring us closer to a cure. Mission: Cure is dedicated to finding effective treatments and ultimately cures for recurrent acute and chronic pancreatitis within ten years. The experiences and unmet needs of patients like Laura and many others, young and old, inspire us to reach these important goals.